Although I was ill the week before (and the week after) I felt good enough to attend the "The Micro Head 4N's" concert in Munich on 26th, february. The day after the concert was Y.s birthday and due to that we decided to stay the night in Munich to have enough time and opportunities to celebrate appropriate.
N. and Y. already arrived some time before me in Munich and first thing to do was checking in the hotel. The actual plan was to get dressed and go out for diner before the concert starts but because we were too lazy and couldn't get ready in time and postponed the diner to after the concert. Bad mistake I was hungry during the whole concert. lol
Actually our hotel was a 3 stars hotel but unfortunately there was no big mirror to take pictures, I'm sorry. I wore the same outfit at K.s farewell party some weeks ago but couldn't take a proper picture there either. lol But it's a simple outfit with my favourite skirt and the skull shirt from GinaTricot :) 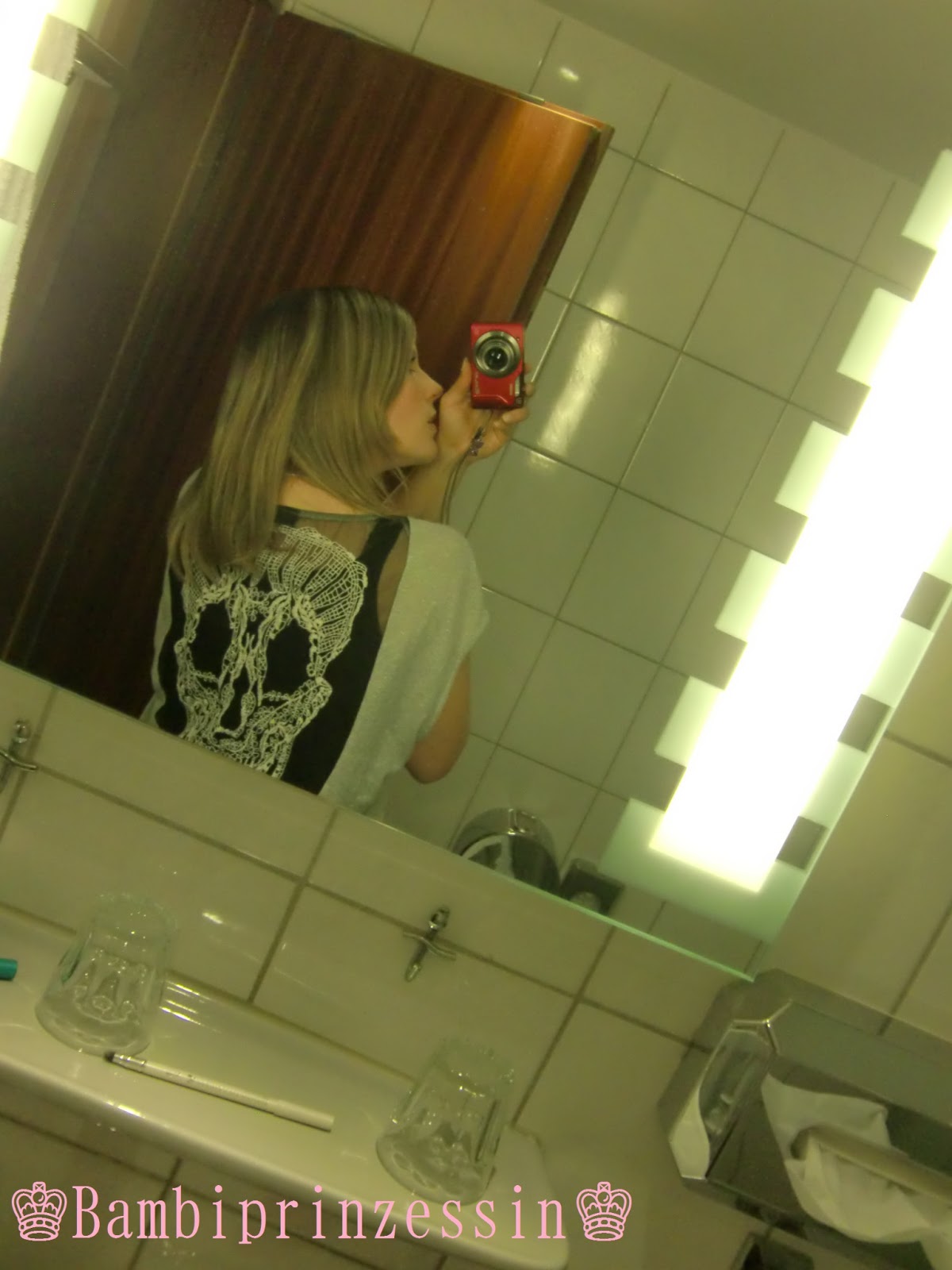 We arrived at exactly 7 p.m. at the venue, slowly went inside and got a really nice place on the right side of the hall on a small podium whence we had a great view to the stage (:
They started at 8 p.m. with 'Hello My Clone' what actually was maybe based on the popularity of the song but as I really like it, I think it would have made more fun if they had played it later during the concert, as the audience would had been more "in the concert" and therefore more cheering, if you know what I mean. Nevertheless, good starter!
I don't know how they continued because I suck at remembering songs, but the concert was totally fun! I went to two D'espairsRay concerts and therefore already knew that Tsukasa & Zero are entertaining on stage (Zero is something like a typhoon on stage! He's twirling, jumping & smiling that you just can't dodge yourself!), but I really liked Ricky, Kazuya & Shun, too! It was easy for the audience to make party and enjoy the concert.

The MC were ridiculous as always from a japanese band. Most funny thing maybe was, as Ricky asked, if someone understands japanese and Y. and a girl behind us shouted the loudest. Right after that Shun wanted to teach us some japanese, but with a glance in our direction he suddenly changed is actualy intention into teaching us "Daijoubu" which means something like "Okay" in english. But I think he wanted to say something different but didn't do it because there were some people understanding japanese. I would love to know what the word was :D
Kazuya got a thousand extra sympathie points for being himself. lol
Tsukasa sang some really popular enka song for us and obviously thought we were all absolutely fluently in japanese because I talked so fast, that I only understand half of it. He's one of these men getting prettier with each passing year imho. Pretty little bastard!
Kazuya & Shun didn't talk that much and I got the impression that at least Kazuya could be pretty shy. Ricky was funny and entertaining but I beg him for stop dancing.... it was horrible. lol He was cute though!
The only bad thing was maybe, that it seemed like they used playback sometimes. But "playback" is the wrong word, I think they put the cd-version under Rickys vocals sometimes, I thought it during a certain song but maybe it was during the whole concert. Probably because Rickys voice was already attacked, I don't know. I don't expect perfect vocals on a concert and I don't think it's bad if they sound different than on record as that's what makes a concert special, isn't it?  On that account I count the use of the CD as a "bad thing". But opinions are different :)

I really liked the fact, that they sent for their staff at the end of the concert and sayed thanks to them on stage :)  Although there was a whole tour planed, the concert in Munich was the last for them as they had to cancel the concerts in Paris, London & Milan I think, due to not selling enough tickets and therefore I wished it to be a great concert and in my opinion it was enjoyable and fun. I'm sorry for the people who weren't able to see them now.
After the concert they also gave a signing session and I bought their CD to let it sign and I like it that much, that I'm listening to it all day, haha ♥  Favourite song is "Monsters Roar". I'm still a bit amused about the absolutely shocked faced of Zero as I said something in japanese to him. YES I talked with him, even without Y. because she was busy with whatever! Wohoho, proud forever :D

Later we left the club to finally grab some food and went back to the hotel, where Y. present were already waiting for her.
We ate at a really nice turkish restaurant with a lovely owner who drew us aside right from the street as he saw that we were freezing like hell. lol He was so cute ♥ (And I was dumb to wear a short skirt and highheels I know xD )
Next morning we got ready and went for breakfast in the hotel. It was okay although the waitress was really unfriendly. I kindly informed her, that there wasn't any milk left and she just said: "No!" and went away. I mean WHAT? lol We also drank sparkling wine and relaxed because we were lazy. (We're always kind of lazy obviously)

On my way back home I met a friendly and outgoing chinese lady, who travels through Germany for 10 days and learns some german while being here. We talked in a chinese / english / german mixture and all the people around us were like: "WTF?!?" but it sure sounded strange. lol I was really surprised how much I understood and I'm still ashamed of my bad chinese. The lady had such a good pronounciation in german, it was amazing! Anyhow,she told me, that she doesn't learn with a teacher but all by herself & that's really impressive. I said a word once and she got the absolutely right tone! If I could do that in chinese I would be pro!!! Unfortunately I never got the five tones right. lol Of course she nevertheless was over the moon because someone spoke - or at least tried ones best to speak - chinese.  It's easier for me to speak chinese than japanese and that's quite surprising, as I decided on studying japanese (and not chinese!) due to my affinity for the language, and now I prefer speaking the language I'm not studying. Maybe because there's no  pressure for me, I know that I won't be perfect and that there a lot of things I can't say.
Actually I thought about meeting here once again while she stays here but as I got ill again right after I arrived at my parent's I couldn't meet her. She invited me to China, though and maybe I'm able to see her there again :)