Some posts ago I wrote something about a summer party at our university and I'm finally motivated enough to write a bit about it~♥
This party's every year planned & performed by the new student council group and I don't know if I already told you but I was voted to participate, too. (^o^) Actually I'm pretty happy about it as I do love working with other people like this, organizing stuff and so on, but we had some difficulties recently and well... We still have to learn a lot!
But here we go with the party!~♥

Fortunately we had a lot of help from the old group and all in all it was a nice & funny day!
First of all we had to prepare the parking lot at our university with tables & benches to sit and the other stuff for the cook & tombola. It took us some time but we were ready in time. I have to admit that it was disordered sometime and even chaotic like hell but okay :'D We survived!
Both our chairmen hold a short speech to start. (I had to censor A.'s face as I know he don't want to see pictures of him online although he hopefully don't know this blog. lol) They introduce the programme and everything.
We had a little programme that started with a band, that was formed by students. I was kinda surprised how much I liked them, they also played some songs I like listening to. Unfortunately I don't have any pictures of them, although in real there were about 3 different bands (with kinda the same people lol) as I was filming. The friend of mine who took pictures hasn't sent them yet I'm sorry. Here you can guess what it looked like: 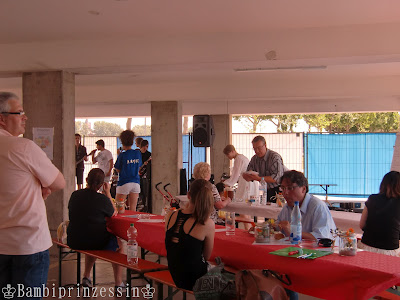 After the first bands a japanese dance group entered the stage and for this I'm really sorry; I don't even have a proper video because it wasn't personally me who was filming but a girl I asked for it. I was busy with other stuff and couldn't see it myself, too. Sad! They seemed to be pretty good. I talked to some of them later and they were really happy about their performance! And I think that's the most important ~♥
Next was a little game between students & lecturers that I didn't see, too. ( I didn't see anything, don't wonder) So I can't even say how it was, the only thing I knew is that our chinese economics teacher and a student won both. The prize was a so-called Piñata; that's a papier-mâché figure filled with sweets and you have to shatter it to get the sweets. I don't know where it actually comes from, but I guess from mexico? Or some spanish-speaking country, I really dunno.
The last important act was the japanese band from one of our japanese teachers! I was able to see a little of their performance, but unfortunately not the whole as I had to do whatever. They're were really great!~♥ I do love japanese as a language for being this beautiful and it's even better when it's sung. She's got a great voice, too and I would love to listen to more of their songs. (*~*)

My friends and I took a short time-out and drunk some strawberry sparkling wine that I got as a present~ I knew before that I would survive only with a lot of alcohol but well...story went on a bit different fromt what I thought. Nevertheless I drunk too much alcohol and eat too less (nothing), the incredible hot weather did the rest to crash my body completely. oops. 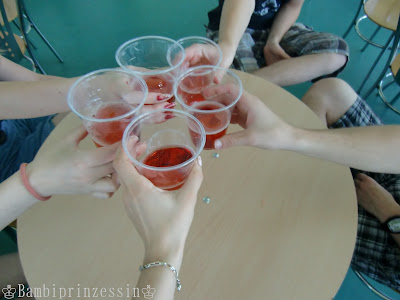 Okay, outfit pic sucks but I don't have any others of me as I took all the pictures this day. Not only for me but for a project at university, too. I hope I can realize it within the first week of the new semester. I wore my favourite skirt and a simple black shirt with a big belt :3

A lot of people told me afterwards, that they liked the party and everything was pretty fine but to be honest I couldn't say yes or no because I hardly saw anything from the programme or talked with new students as I was busy the whole day with all the things you have to do as organizer of such an event. I'm happy if it really was that good, but if not I can't change it, I gave my best ~♥
The time I could spend with my friends was fun as always!

And to end this entry a really really big ♥ME LOVES YOU ♥ to all of my friends who supported me through this day and were concerend about me in the evening. I'm sorry for making you worry ♥ You mean the world to me, you know?


That's it for now little cuties~
I hope you liked the little glance behind the scenes of my university life (^.~)
Take care & Keep Shinning! ~♥
♔