♔
Hi Cuties ~♥
I'm really trying to catch up my plan with the entries and therefore you have to read so much these days, I'm sorry~ I'm pretty sure times are coming when I won't write so many entries.

Coming to the actual reason for my trip to Berlin; the Quantize Fashion Show!
Due to J. being friends with one of the organizer we got to know this event and the opportunity to attend it - thanks again Julie, it was great ~♥ 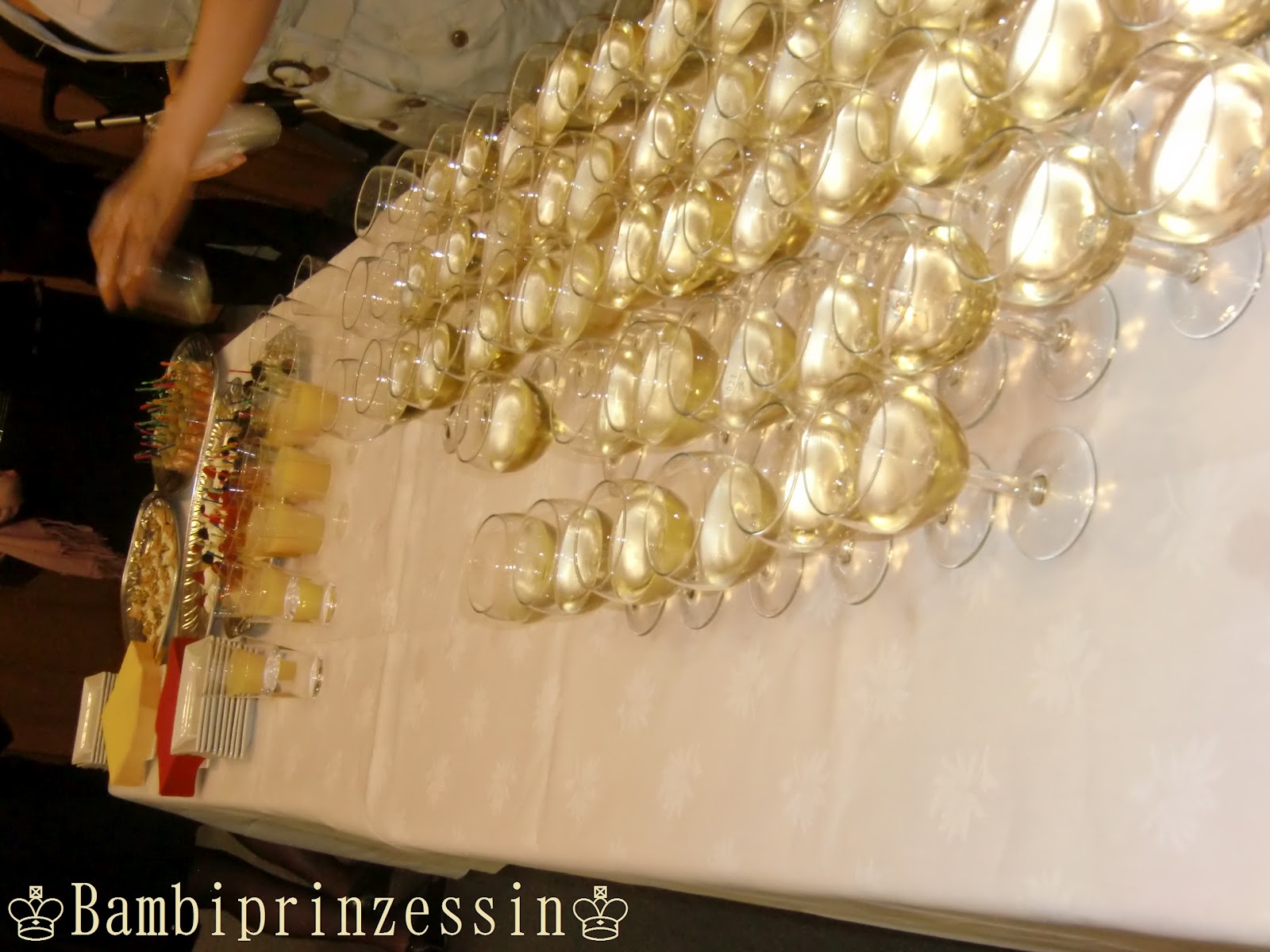 Quantize is a japanese brand, based by two really cute japanese women and located in Fukuoka, kind of the fahsion hotspot in Japan? I didn't know about that but as they told me that most of the japanese brands are actual coming from there I think it's right. Furthermore there are a lot of other companies located, which are resident in the beauty industry like hairdressers, make-up schools etc.

This event was hosted at the japanese embassy which I entered for the first time. Yey I was always standing in front of it and being jealous of the people entering - no, that's a joke, but it was the first time for me being at an embassy at all, so~ Not really special to be honest but I felt honored though. ^.^

Organizer of this show was the Fukuoka-Asia Fashion Promotion Council (FaCo) which made a point of connecting all the different fashion industries in Asia. They're operating from Fukuoka, supporting different brands with information, promotion, etc. Everything important if you name it like that.
Right after we had entered the embassy a nice girl working for Quantize gave us some flyer and folders which introduced us to FaCo, their work and some other brands. There were a lot of people around and hardly anybody spoke german, most of them actually spoke japanese which was kinda awkward for me. lol We got some white wine and waited for the show to beginn.
First of all some people hold speeches, the head of FaCo couldn't make it to the show and a woman read his speech. Everything was said in japanese and also translated into german. Later the woman responsible for the Fukuoka economy department for textiles also said how important fashion is for the region and how they're planning to work in the future.

As beginning of the show, a japanese guy and woman (wearing Quantize outfits of course) presented a spectacular dance. I was that caught up in the presentation that I didn't take pictures or anything, but it was a super show! (*o*) It was a mixture between balett and... something else, I'm not a dancer, I'm sorry. It was great though ~♥
Then the fashion presentation started: Quantize was the only brand showing off clothes worn by models. All my Loving presented some on mannequins. 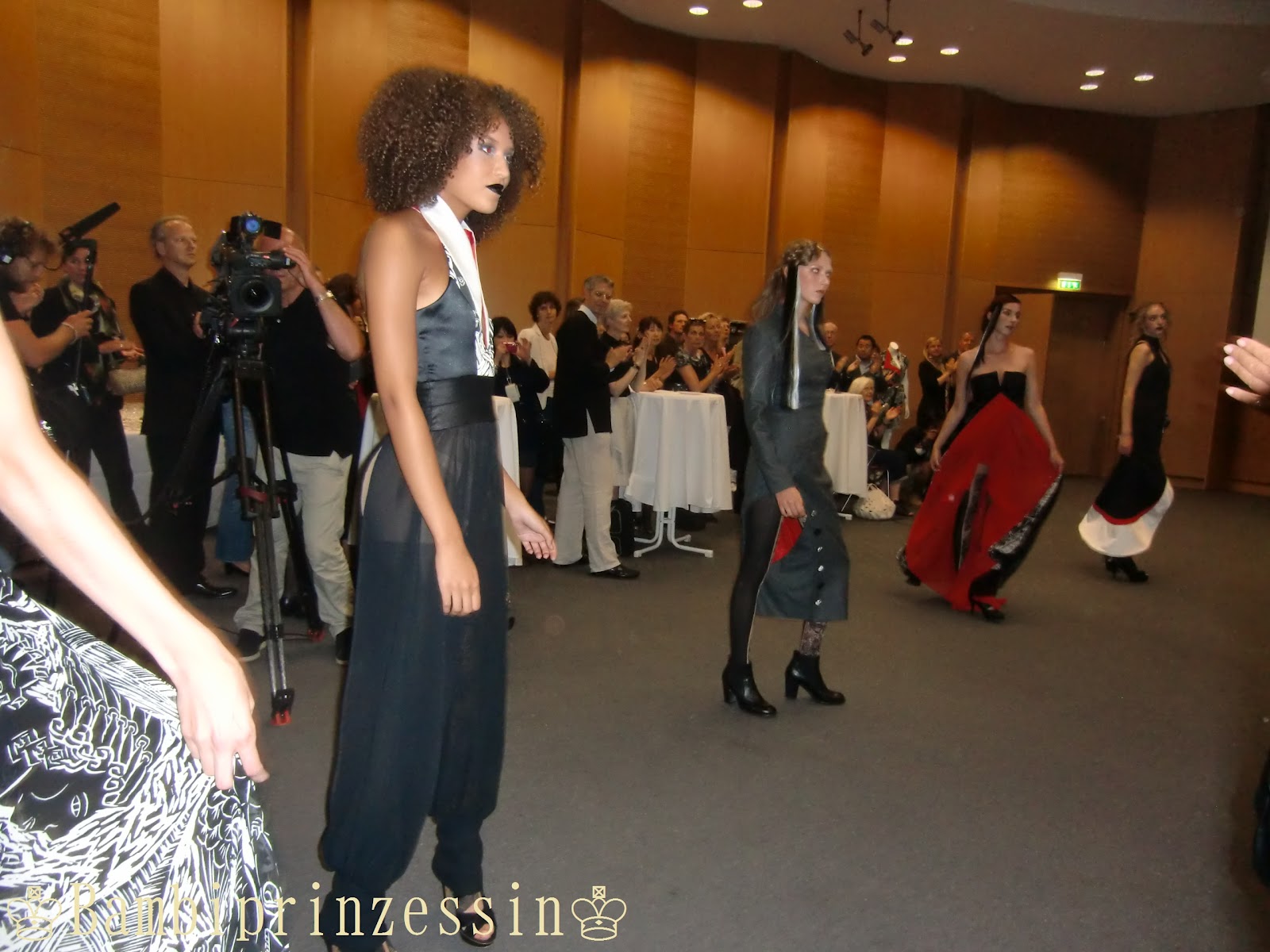 I was surprised how much I really liked the Quantize style! The best were these tights, everybody I talked to loved them too and you could have bought them there. But as I'm clumsy with tights like these it would have been wasted money - unfortunately. I do think they're looking super special and nice, don't they?
There were also some mannequins with more Quantize clothes: 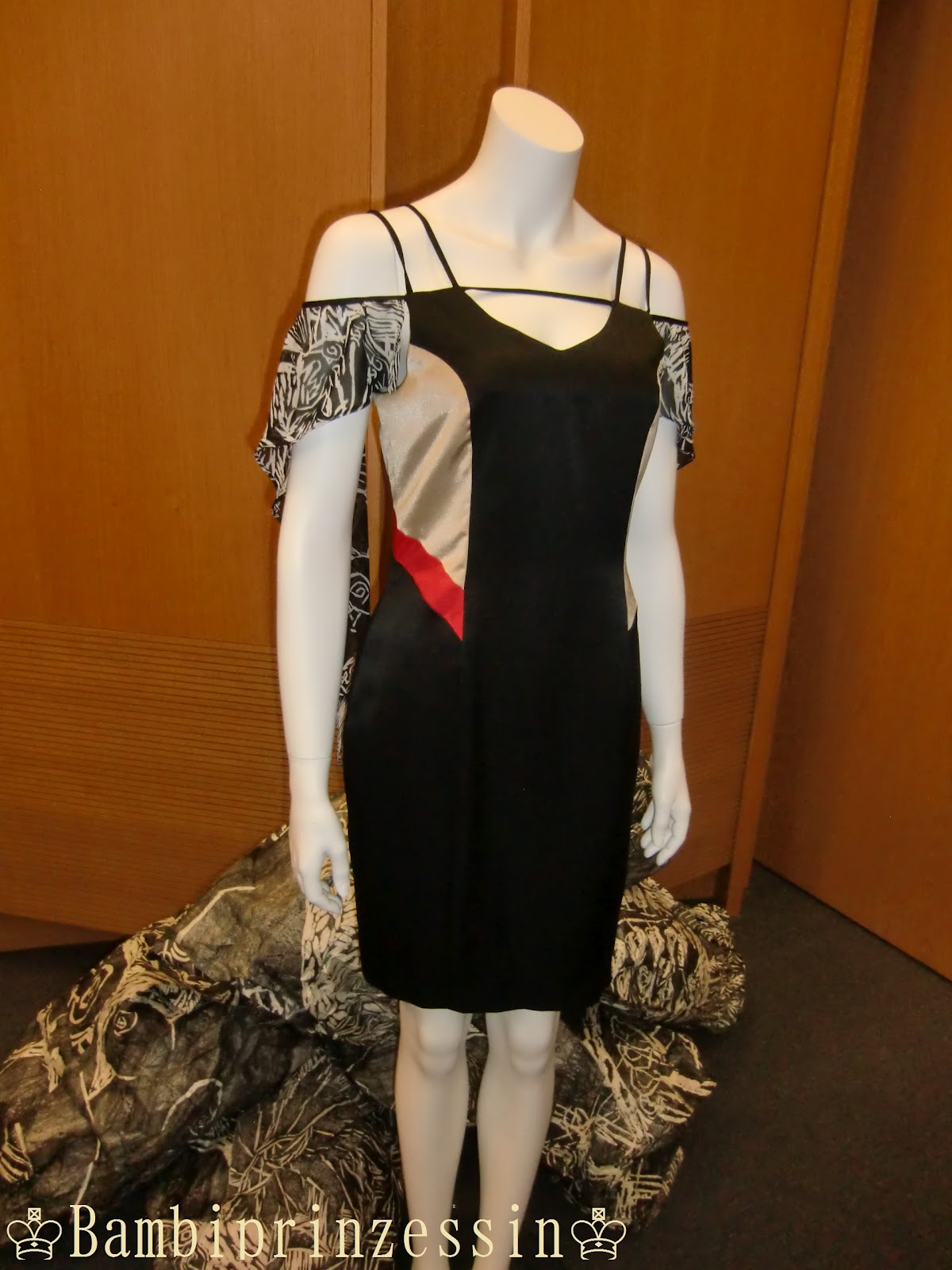 This dress was worn by a woman with a little color change; the basic color was this lovely gold shade and the part, which is gold in the picture above was black. I liked it a bit more in black, but gold doesn't suit me so that's just natural I think.
Look at this lovely pattern! ~♥ It was created by an artist especially for this collection if I remember it right. I think it looks so fabulous! Love the idea how they have  put the sleeves here!
Nevertheless this was out of all pieces they've showed us, my favourite one! Maybe because I love black as a dressing color more than anything else, but although because I _love_ the fashion of the pattern part! First of all you may think it's not that flamboyant but when looking closer you'll see all the refinement. Unfortunately this won't fit me in a thousand years as I'm not japanese. lol
This pattern is so lovely ~♥

You may say, that the woman with the huge, curly hair wears the most beautiful oufit but I have to tell you that unfortunately the whole backside is made out of a see-through fabric. You're kinda naked from behind. lol
Out of these outfits I for one like the white one in the middle the most.


Not only All my Loving & Quantize outfits were shown, but although some tutus, created with a special kind of silk, I think. They were  breathtaking beautiful! Everything was woven with a special skill ( if I remember it right). 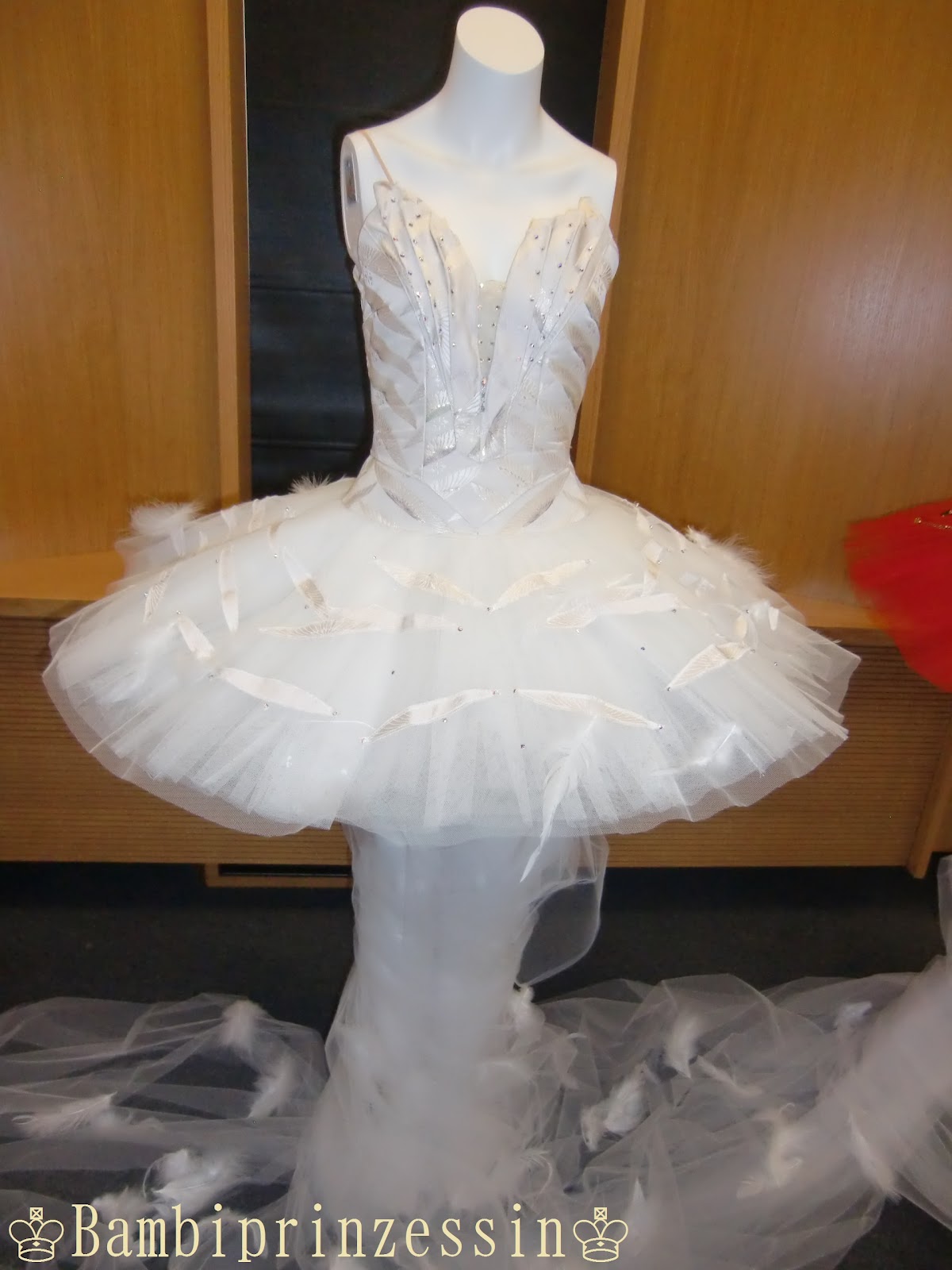 This was the one that impressed me the most - not only because it's rose but although because of the gold  stitches ~♥  But take a look on your own: 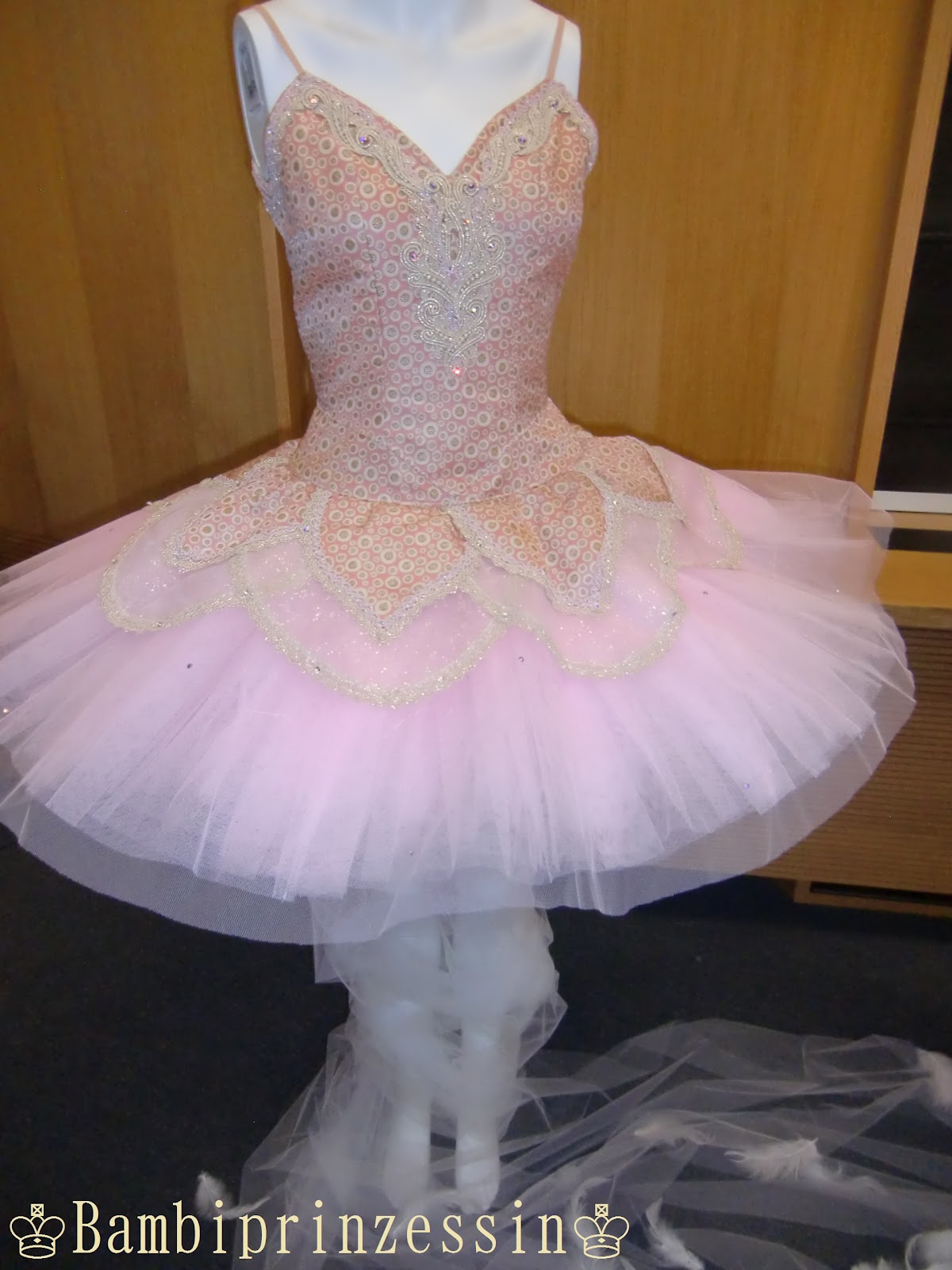 Could you call this anything but beautiful?

After the show sushi and other snacks were offered and of course, I went for sushi, although I like it with vegetables only the most. Haha, no surprise, hu?

That's a pretty long entry but I didn't want to cut it into pieces and I hope it's okay for you, although there are a lot of pictures. Thank you for reading ~♥