Haven't posted a decent entry recently, have I?
I am sorry for this pause and lack of proper updates but real life kept me busy as the word is.  Due to some personal reasons I wasn't able to post this review in february as the rules actually say but well... at least I had finished it within a month. To be honest it just took me one train ride. lol 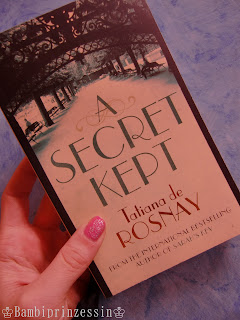 >> 'A Scret Kept' plumbs the depths of complex family relationships and the power of past secret to change everything in the present. << (blurb)
This book deals with one main character named Antoine, who invites his little sister Mélanie for her 40th birthday to a little island where they used to go to with their mother, who died as they were small children. He wants to go there, because his whole life seems to be in ruins; his wife has left him for another man, his children are strangers to him and his job doesn't fullfill him any more. On their way home, Mélanie wants to tell him something she reminded on the island, but before she can say it, she losts control over the car.
While Mélanie is slowly recovering, Antoine starts to think about the things that went wrong in his life and why. One day, she finally remembers everything and once again Antoines life seems to be in ruins from the ground up, doesn't it?

If I had to score this book on a scale from 1 to 5 stars, I would give it... 2. There are some points I really liked, like the development of the secondary characters. Especially Antoine's children who're changing a lot. Another thing I appreciated was the positive atmosphere this book creates.
But all in all it wasn't something really special.

I already bought the book for march but I haven't started reading yet as I'll wait untill university starts again (12th march (;^;))


♔
Posted by Bambiprinzessin at 18:14