As I told you, university's already started for me and nearly ate all my time, I'm sorry.

Nevertheless I take the time for writing a bit about the Megaromania concert yesterday in Bochum which I attended with some friends. (^_^) First we weren't sure how it would be and if it was a good idea to go there but I really think it was worth the trouble ♥ (and the people of course...)

First of all my outfit. Nothing special to be honest but I didn't feel well and all in all I was kinda 'whatever' yesterday. lol 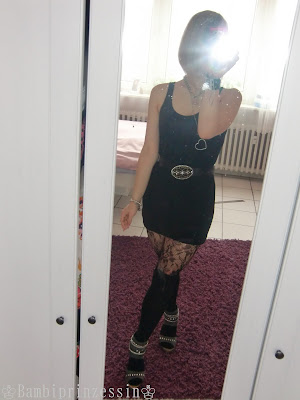 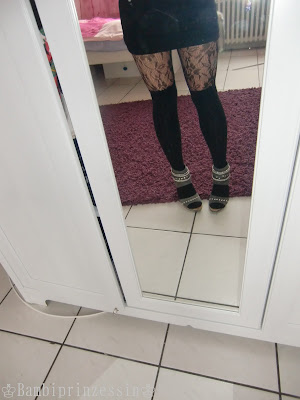 A little close up from the accessories, which weren't that special, too but I'm still falling for the SexPot Revenge Chain (♥_♥)
And you get an idea of my actual nails. (I am honestly said too lazy to take a proper picture of them and I know, that in a few days I'm getting used to them and change the design again, I bet!) 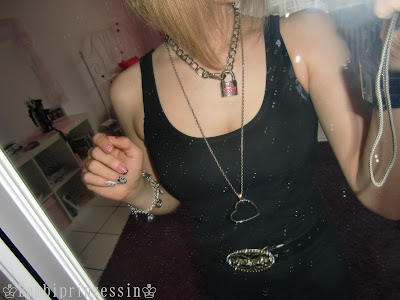 Our trip to Bochum was kind of special though. lol We had a lot of fun and maybe some people we met, had that, too. Like this guy at the gas station who was like: "wtf are these three prostitutes doing here???!?!" We're going to a concert, what are you thinking? :D

We arrived in time in Bochum and waited patiently with the others, always aware of people we may know but don't want to talk with. Well, I think you know this kind of situations, don't you? (^^) The entry and everything went surprisingly smoothly and we searched for a place on the 'gallery' if you can call it that way. 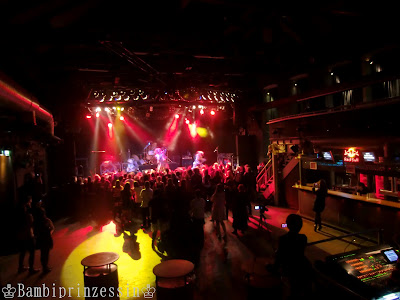 I know, it looks like being really boring due to less people etc.pp but to be honest I was amazed how great the band handled the few people :3 Furthermore the audience was just great, shouting, banging, whatever ♥ Of course it was a little bit difficult as the club could actually carry about... 500 people? At least I think something in this magnitude as the last concert I attended at this club was about 400 - 500 people and it was crowded like hell ( but amazing though).
Nevertheless I enjoyed myself ♥
However, I for one had enjoyed myself even more, if I had been completely healthy but shit happens and the concert was great though.

The f'cking only thing I would had changed was....

Misery (you stupid (§/%=§(/$%=!!!!) spit water on me that felt like 10l AT LEAST and I was nearly wet standing there and just thinking: 'I will hate you forever for that'. Well but I was kinda reconciled as he was standing right in front of me because... he was smaller than me! (^o^) It's not that I'm that big, actually I'm a dwarf (but a cute one) but as I wore highheels I could had spit him on the head (^.^)v (what I haven't done of course, I was more like; oh  my fucking gosh are you cuuuuuuuuuuuuuuuuute guy ♥♥♥♥♥♥)


The way back home wasn't that great and as I was feeling even more miserable than before the concert I fell asleep a couple of times and it took us hours to finally come home again. But I am really happy that we went there and I really hope, my lovelies enjoyed it just like me (^_^)


And now I have to put on make-up and walk to the city.
Please take care, cuties ♥
♔