☆ She lives in the clouds & talks to the birds ☆


Anyone who recognised the title? It's taken from >Not like the other girls< a song by TheRasmus becauuuuuuuuse....
Last monday I went to Munich to attend the TheRasmus concert. I have to confess that I still l♥ve them, although I was really shocked as my friend told me, 'In the shadows' was released in 2003.... (O_O) I meand, that's nearly 10 years ago!
And all these years I had been waiting patiently to be able to go to a concert one day. I could be a really patient Bambi, haven't thought that about me have you? (^.~)
You just can't even think how much I tracked attention with this pink blouse. Everyone just wore...black. Black over black over black and they were looking at me like... I don't know a freaking cockroach (O.ô)" Ähm, sorry girls - I'm not that into black?
Stupid people are stupid.
I left from my parent's, slept at my friend's and took the first train back to my own apartment at tuesday morning so I had huuuuuge luggage. But fortunately my friends dad fetched me and we drove together to Munich (^.^)
We had  to wait about an hour before we could enter the club and took a few pictures because K. already asked me if I wrote an entry about the concert when we were driving to Munich. Of course I do cutie ♥ 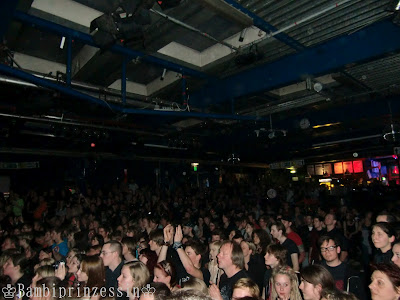 I would have never expected the hall to be that crowded in the end (O.ô) There were a lot of different kind of people (although me was the only pink one untill the end) and a lot 'older' ones like us. Haha, that's not that rare at concerts these days to be honest.

Concert itself was great ♥
Waiting all the years was totally worth it (*-*)
Due to lucky circumstances we were able to enter the first row and had perfect visibillity. It was just perfect for taking photos, too fortunately, although I couldn't catch a proper picture of the drummer. We were standing much too left for that.
Nothing to say about the band playing first, because I just didn't like their music, although they seemed to be nice guys. Nevertheless I sat down while they were playing (greetings from Japan....) 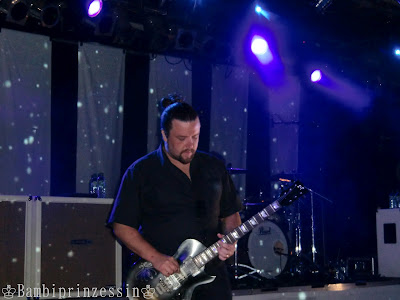 No idea what was going on with him; he smiled at me as the concert began but afterwards he looked like DarthVader (oo)""" 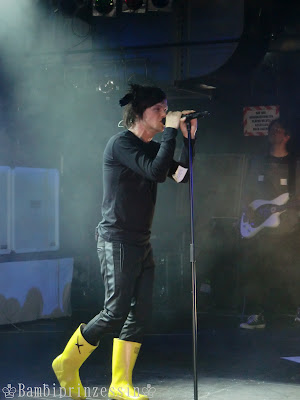 Lauri is the most fashionable guy on earth! Anyone who doesn't share my opinion...?
Na, I just don't know what could have came over him to wear such an outfit. lol  But he was freaking cuteeeeeeeeee, smiling like a child with chubby cheaks ♥ I do love his voice. Yes. I don't care if the set the right tone or not. He made my heart beat faster - deep inside I'm still such a fangirly it's unbelievable haha (^.^) 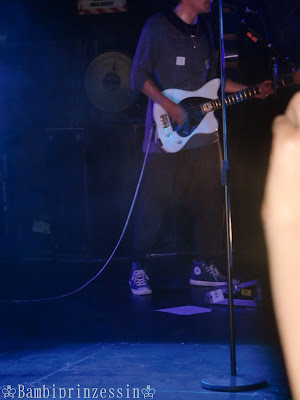 Same thing that came over Lauri for the shoes and the trousers, came over him for these even more horrible trousers. You can't see it properly but I was laughing sooo hard. And of course; his 'tape surgery' his new nipples.
These guys are just...fucked up in mind. lol
BUT SO MUCH FUN TO WATCH ♥ 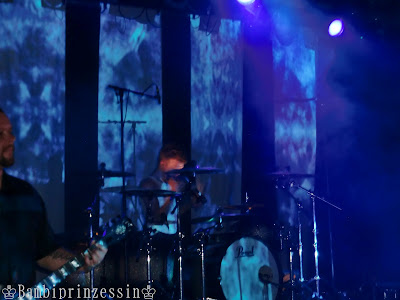 I tried and tried and tried.... I couldn't take a proper picture but I could watch him from time to time and it was so nice to see how much fun he had. We too Aki ♥ 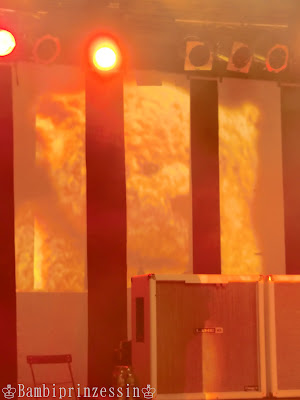 So much love for this backround! It was so cute, although I didn't get the connection between it and the song... but who cares.

They also played some songs acoustic and it was so beautiful (*.*) I filmed 'Sail away' and it's just ... so perfect. Furthermore I heard 'F-F-Falling' live which I hadn't expected to do ever because it's such an old song but... they played a lot of old stuff. Good for me as I just still love the older songs a bit more than the newer ones ♥
I was kinda surprised that I could sing along with nearly every song they presented this evening. Haha, my brain is such a genius, but unfortunately just with such unimportant things.
All in all they played about 2 hours I think.
Bought his bandshirt and a bag after the concert. I thought a bit variety wouldn't be the badest for my warderobe and decided against the black shirt and chosed the white tank top. So in love ♥ Okay, it's a bit long (actually longer than my hotpants wtf) but nevertheless I love it.

That's it for now. Enough fangirlyspam for today!
Actually I should make a speech tomorrow in my japanese class but I totally forgot about it and now I don't have any voice. Oooops.


♔
Posted by Bambiprinzessin at 21:12