I hope all of you're doing fine!

Two weeks ago Yaya, a friend of her Nana and me drove to Munich to see Ace & Anli Pollicino. We started the day chilled and slowly and it even got slower as we drove right into a huuuuuge traffic jam 50 km before Munich which accompanied us till we reached the city. (~.~) We weren't in a hurry but it was too damn hot in the car as the sun was shinning. Me don't like heat meeh (>_<) 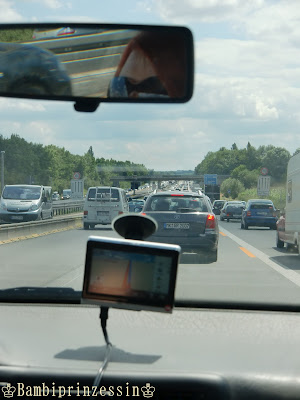 Although we lost hours in the traffic jam we had some hours left to wait.
Actually I like chilling on front of the hall before concerts. Why? Because one's always meeting people. Could be that they're neither smart nor nice but at least interesting! Haha :P
This time I met some girls I got to  know two years ago in Munich at the Anli Pollicino concert back then, which was pretty funny as we haven't talked a while.
Someone I haven't seen for ages, too recognized me immediately. I felt kinda akward to be honest as I always imagine myself changing a lot. Seems like that's not true at all lol
Waiting was relaxed this time but as they opened the door people went absolutely crazy. I have no idea what they were thinking as we all know, it's not going faster if you push all the people in front of you. At least some people know this.

Concert itself totally worth the trouble I had ♥
I already knew that Anli Pollicino were fun to watch, but Ace were really cool, too! (^_^)
Ace started the evening and while they were playing, we were standing on the right side, 2nd row in front of Rookie. (Because I wanted to see him so badly. NO REGRETS :D) such a cutie ~♥ He fell of the stage and suddenly he stood directly in front of us. I don't know who was more surprised lol
During the 80 minutes he didn't stop a single time smiling. Honestly, he was shinning like a little sun it was adorable. The only negative thing about standing that close to him was the fact that he wasn't really careful with this &/== violin. Didn't count how many times he hit us. lol
Anli Pollicino were sooooo much fun! As it was getting hotter and the people coming closer, we left the 2nd row after 4 songs. Due to some... hygienic aspects we hardly survived these 4 songs tbh. Showers are such a nice invention, don't you think?
Yaya and me bought something to drink as she was afraid of me fainting (at least that's what I'm thinking she thought lol) and stood at the back. Therefore I recognized that hardly anybody was standing still in the hall. All the people were dancing and partying  while Anli Pollicino were playing and that kinda impressed me because some people told me before the concert, they had came only for Ace.
I'm still in love with the feeling during this concert.
There are times I keep asking myself why I'm still attending concerts like this, where people are meand and bitchy sometimes but this concert showed me a reason ~♥

Both bands had a signing session afterwards and for that we waited. I don't know if that's true someone told me, that Ace were expected to sign merchandise only and Anli Pollicino the entrance ticket. Doesn't matter though. I bought a photo set from Ace and got a picture of Rookie from the other photoset lol Actually I've wanted to buy the black photoset because I like the theme more, but I asked something about another picture and therefore the lady gave it to me (^.^) Yey~♥

Well... I've got a kinda basic problem in my entire life; I'm shy. And it's the worst when I'm expecting myself to speak japanese, so I didn't say anything at all except the normal blablah, although I actually planned to say something. But one of the girls working at the concert kept reminding us that we had to hurry etc. pp and she made me so nervous that I completely freaked out. lol No offending, but girl, I still hate you for this although I know you just did your job. lol

After the signing session we stayed a little longer in front of the concert hall because I didn't want to go home already. It's kinda hard to explain, but I was fucked up the whole day and I know, that Yaya really tried to cheer me up and it worked just fine during the concert, but as it ended I neeeded some time to come back to reality.
I'm really thankful that both of them went with me to Munich, as I know they only bought tickets because I've wanted to go there ~♥ And I'm glad that I didn't cancel everything because I felt like...shit. It was a great day and I really enjoyed myself!
No outfit pic this time because I forgot it, I'm sorry. Outfit wasn't special though, I wore the white shirt I bought some days ago and black shorts. Outfit above was the one I changed into because I was cold after the concert.

While writing this entry it came to my mind that I really have to put more effort in my styling again. lol I'm not used to a unstyled me and actually I don't want to!
That's it for now :3