As I've already told you in my last entry, I went to the All Time Low - concert in Stuttgart on friday and to cut it short for the present they were awesome! ~♥
But in sequence, starting with the outfit, which was my biggest problem as it was one of these 'everything looks like bullshit'-day and I couldn't decide  for something. Don't know what was wrong lol
I ended up wearing this: 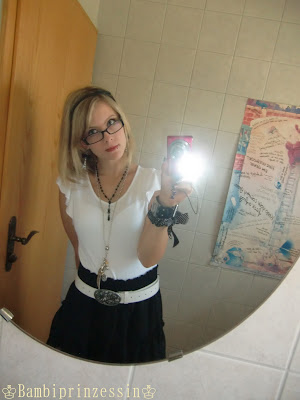 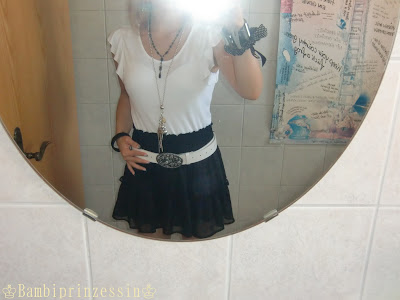 I was told previously that I would be totally overdressed no matter what I'm wearing so it actually didn't matter. Nevertheless this was the only outfit I felt comfortable enough with.

In Stuttgart I met the three girls who kept my company during the day at the main station and fortunately Melli knew the route to the concert hall. I would have been totally lost! lol My sense of direction matchs up to the one of a pumpkin - nothing more.
Waiting was relaxed as always and we killed some time by taking pictures and chatting. Sometimes ATL did us a favour and sang, shouted or.... did other stupid things in front of a window going out to the front of the club where we were waiting. To make things even more entertaining we guessed what they were doing inside but to be honest I hope, they didn't do anything of our proposals. 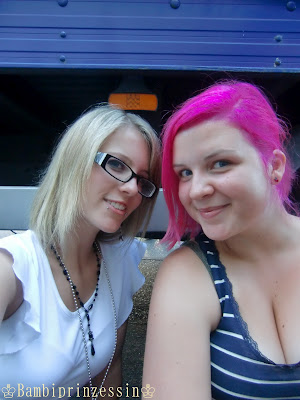 The official fanclub members were allowed to enter the hall first and do a 'Meet & Greet'- thing with the band. I don't know any member of the fanclub so I don't know the exact arrangement but the girl standing before  me during the concert said something about a lot of crying girls. Well... all girls are the same, aren't they? (^^)
As they started with the regular opening suddenly the people standing in the first 6 rows shouted and pushed forward, against the security men and the barrier. Fortunately someone shoved me through all the girls standing in front of me. I  have no idea why but I entered the hall quite early without doing anything. lol
But it seems like this pushing and being impolite is a german phenomenon isn't it?
I don't understand it at all and maybe I won't ever but it's freaking annoying! Seems like not all people have already recognized that you're able to have a great view from behind, too!
The opening act was a band from Switzerland called 'Goodbye Fairbanks'. To be honest opening acts aren't my cup of tea, of course small bands have to be promoted etc.pp but I rarely like them. These guy may be pretty good on CD but I went there to see All Time Low so... 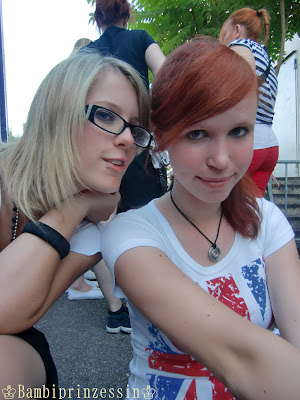 All Time Low were great! ~♥
As always I don't have a setlist or something like that but acutally it isn't that important, is it? I was happy that they played "The Reckless & the brave" and "Jasey Rae" because I like these two the most. I filmed both performances but unfortunately it didn't work properly - you can't hear anything... (u.u)" but I listened to them live, that's actually enough.
I don't know if anyone of you know All Time Low but most of their songs are danceable and funny to party to and that's what we did! We were standing in the 3rd row in front of Jack so we had best view of the numerous bras he received and distributed to his bandmember later too. lol
My cam wasn't in its best mood this day and all the pics during the concerts are either blurry or simple overexposed.
It was fun to dance & jump & enjoy myself and I wish everyone felt that way. As already written, we were standing in the 3rd row, 1st & 2nd row were fanclub members, we had a great view and from time to time even enough space to sit down. I just can't understand why people have to push and beat during a concert - you HURT other people don't you understand this simple incident?!?! I for one don't like being hit in my face and on that account I don't hit other people. Easy isn't it? I know that sometimes you unwittingly hit someone or jump on someones feet, etc. that's okay, being short of space, wild jumping, rampant partying - I know that believe me. But an apologetical glimpse at your victim and it's okay. It's fucking not okay to jump purposely on someone to bomb them away especially if you're taller & heavier!!! Bitch next to me nearly broke my toe - I can't go jogging because of her being rude and absurdly mean.
WHY we were already standing close to the stage, even me with being -20cm than her had a great view, I bet she saw even better than me, but she tried to push everyone out of her way. Don't know maybe she wanted to play guitar on stage, too....
Concerts would be so much more fun with a bit more consideration honestly... 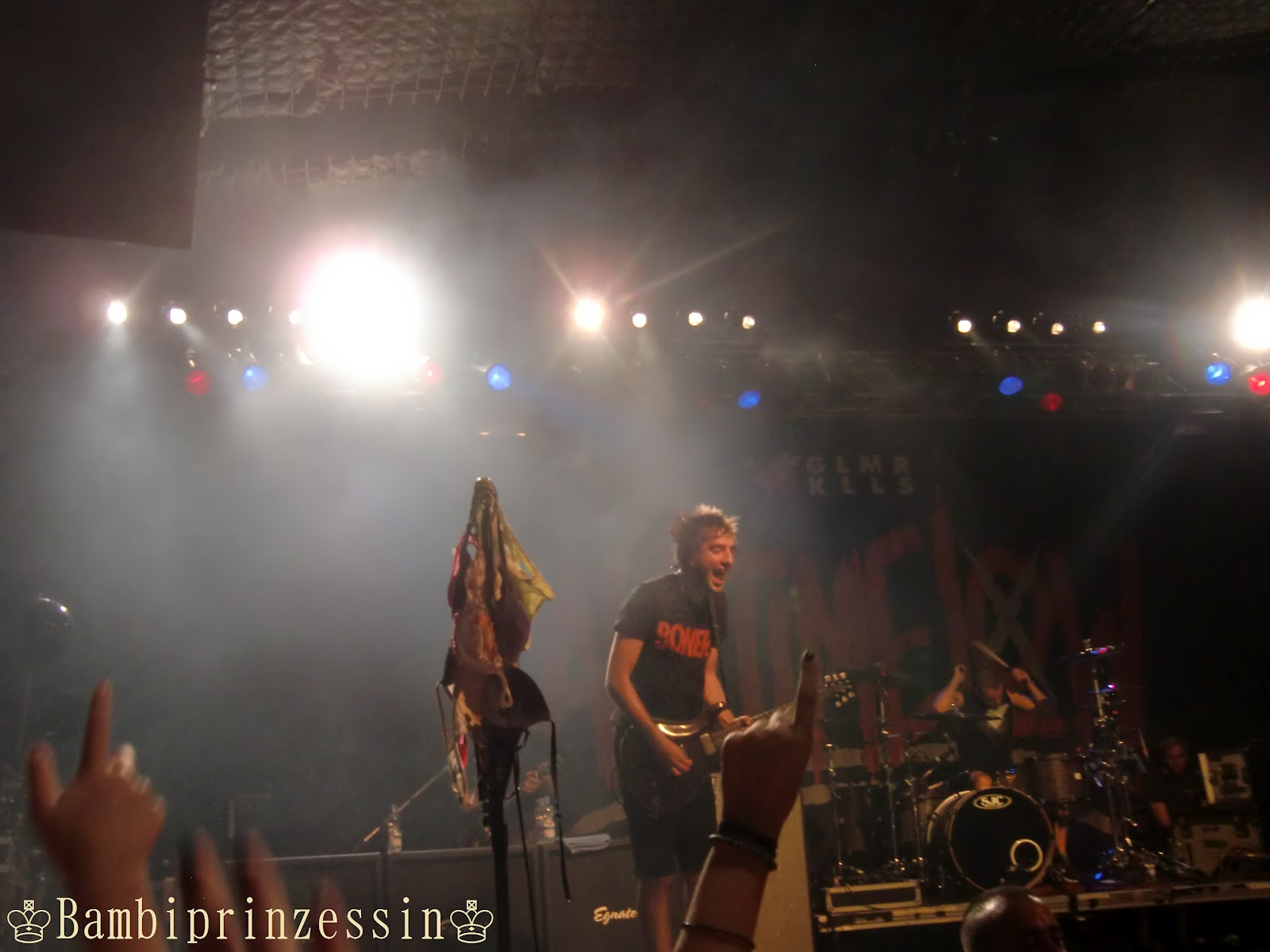 Due to my hurt toe I left my friends and went to buy something to drink, where it was crowded, too but I needed not to be afraid of someone else treading on my feet. Even there I had a good view of the band and it was nice to see all the people dancing from behind. I had nice company and everything was pretty fine untill Alex hold his therapy speech. Half of the hall  (maybe the female part but it was impressive though) suddenly started crying.
He told us this and I totally agree:
"This song is basically saying fuck you to anybody who has ever tried to walk on anybody else. There are too many fucking people out there that think that they are doing it right and they try to force their ideas on other people. And I say fuck that. Every single on of you are allowed to be who ever the fuck they want to be. So just remember to alway be yourselves and be good to each other and don’t walk on anybody else” [Alex Gaskarth] 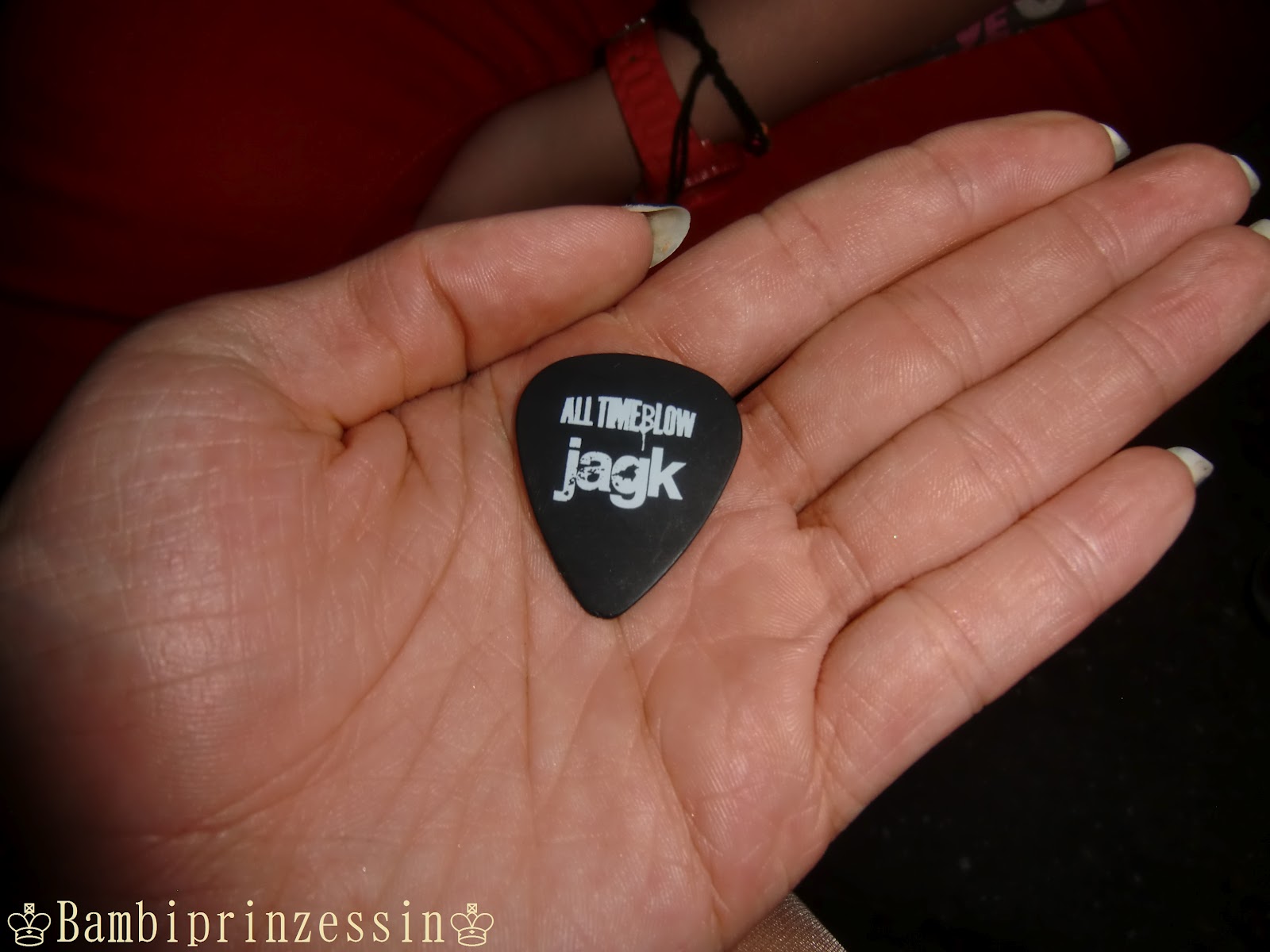 Melly was lucky and found this plek of Jack during the concert.

One of the guys who accompanied me during the last songs left the hall next to me and because we were shocked by about 30 parent couples waiting for their children, we suddenly started hysterical laughing. lol He said something like: 'Now we know the average age inside the hall' The parents looked not really relieved at us laughing our heads off but well...

Unfortunately I had to catch my train back, on that account I had to leave my friends quite early, but I didn't want to wait 5 hours at the main station. The others later took pictures with the guys and got some autographs.
I bought this shirt before I left and I loooove it ~♥ I asked the guy who sold the merchandise if he could show me this shirt in size M. He just looked at me, shook his head and said: "You'll need S." And only gave me this one. LOL It's okay but what if I really wanted the M? 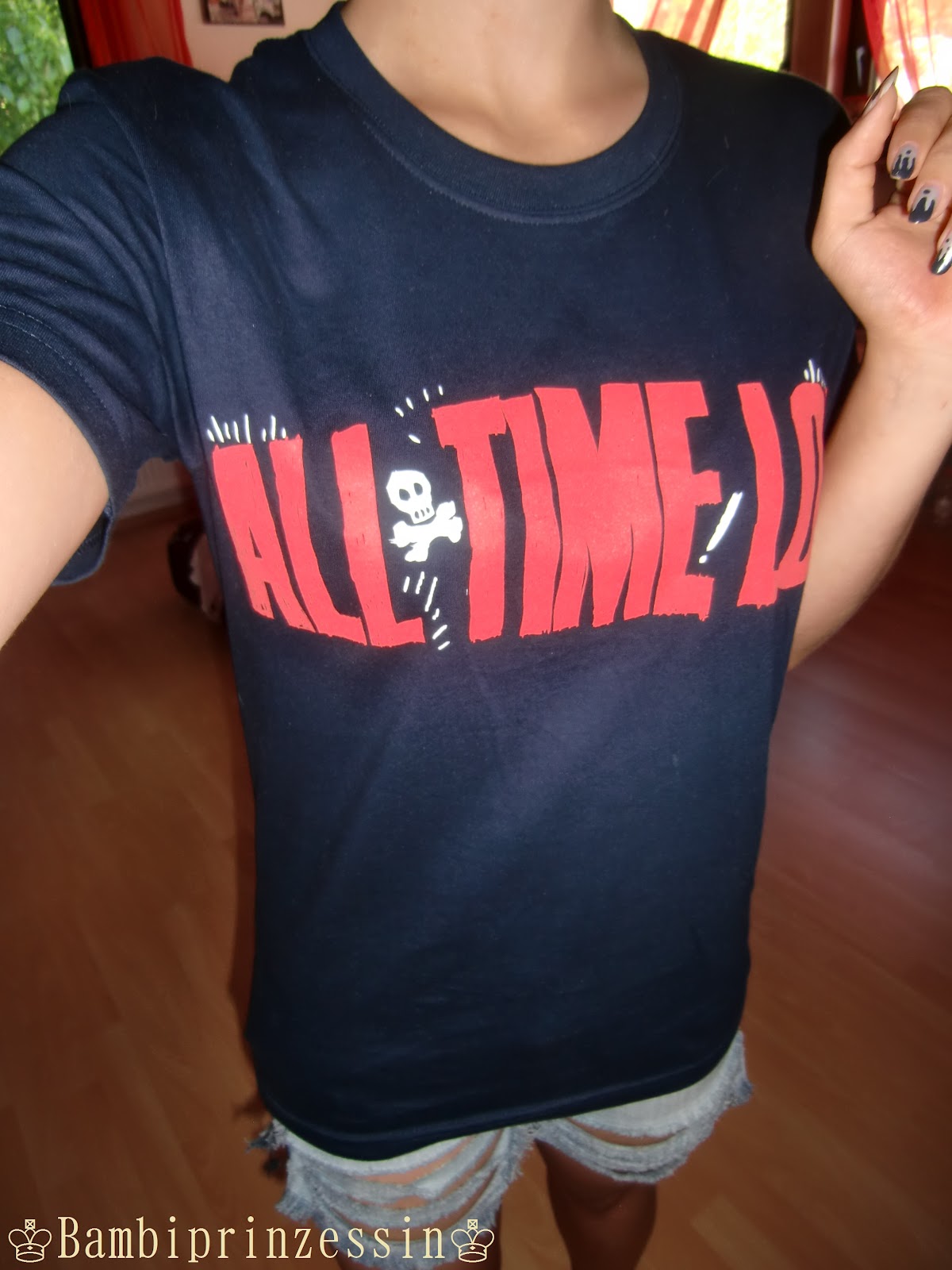 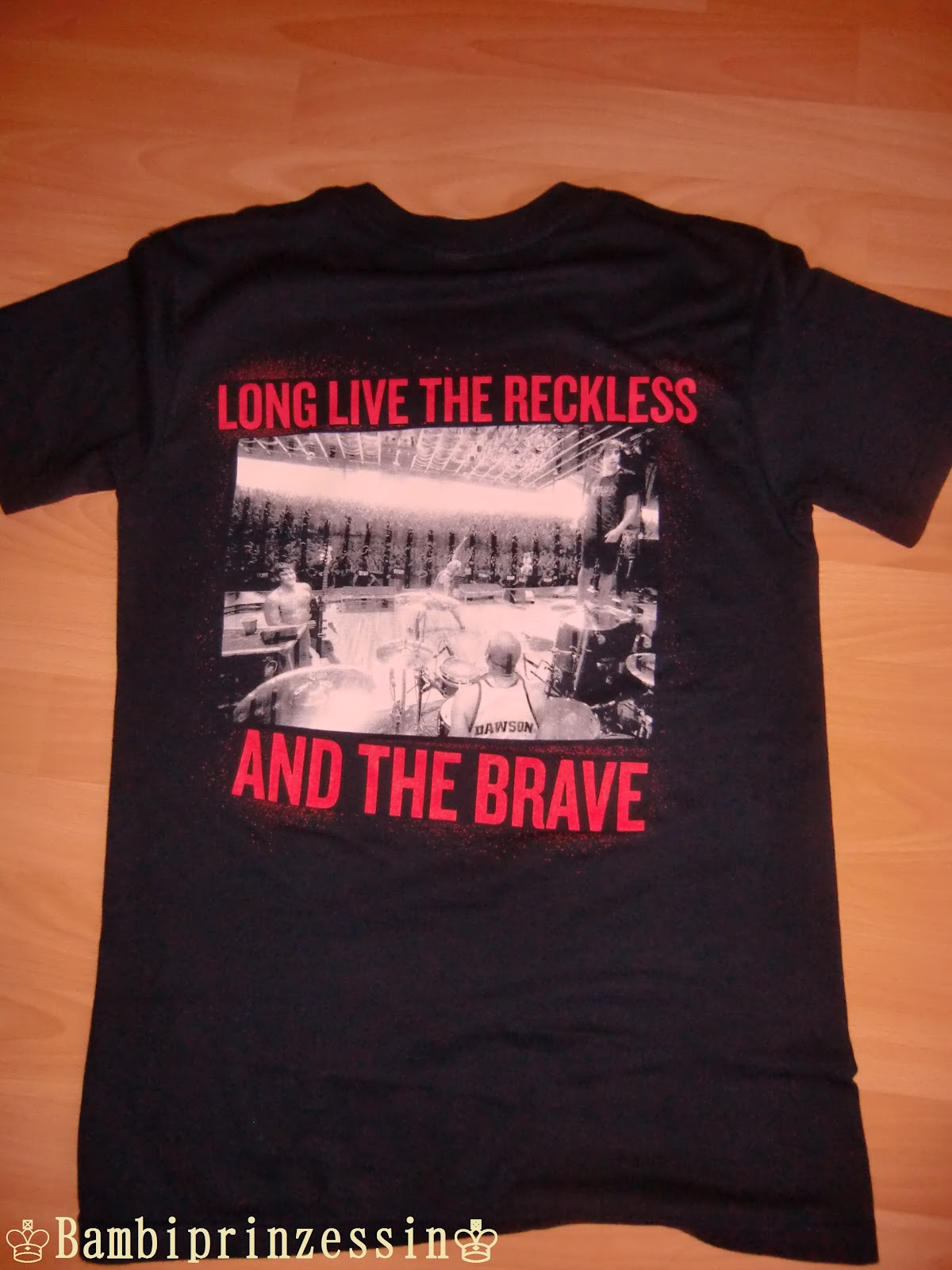 Jessi bought one with "Stupid & Fearless" written on it. lol

The concert was totally worth coming! It was fun and I really liked it, thanks to all the people I've met ~♥

♔
Posted by Bambiprinzessin at 12:27