Hello Lovelies ♥
I got a couple of pictures here I plan to show you, but as I went to 'Penny' for an hour another idea plopped up in my head and here we go (^_^)

In the first entry I wrote that I've been living vegan for about four years now and for people who get to know a vegan the first time, it's always quite hard to imagine how I live, what I eat, etc. As I changed my diet to the vegan one, my mom was totally freaking out - although she already had thought that I would change. But after four years she has to admit (finally!!) that I really have a clue about diet and all this stuff, not only because of my biology A-levels (^.^)
One of the basic ideas about this blog was actually show some people that there are a couple of vegan boys and girls out there, who're as cool and smart as anybody else - without being kind of crazy. Due to that my intention is, to post some vegan food and stuff here and there - and of course because it's a huge part of my daily life althought I'm not affected by this 'lifestyle' every day. 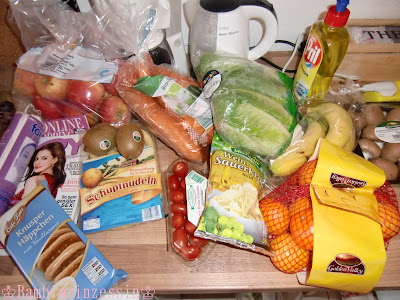 Actually I don't know why some of my friends keep asking me what I'm buying to eat because... it's quite simple isn't it? Due to that constant question, I decided to show you today what I bought for the next two weeks without noticing that I perpetuate a stereotype with this picture.
It only show fruites and vegetables, doesn't it? (^^)
That's because you should please always bear in mind when looking at my food pictures, that I'm not only vegan but on a diet to lose weight too, due to that I rarely eat carbohydrates but a lot of protein.  And of course it shows the fresh food I buy regularly only, because rice, couscous (♥) and noodles I'm taking from home as my parents always buy too much. lol
To keep it short; there is much more foodstuff vegans 'can' eat than I show you.

And now I have to hurry for university ♥
Keep smiling my beloved !!!
Posted by Bambiprinzessin at 15:20