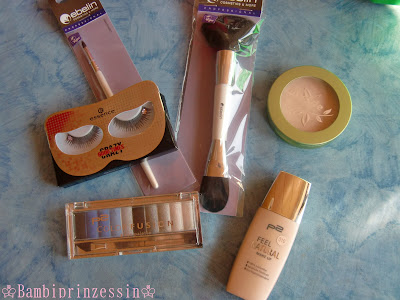 I know that I am horrible (;_;)
Once again I bought make-up although I said that I had bought everything I need. But as my make-up I left at my parent's is the tone I use during summer it was wayyy too dark for now - I looked like a bad painted doll. Due to that I bought it in a lighter shade and now I am happy again (^_^) Especially as I took the blue eye-shadow palette, too. I am really satisfied with the colors! They suit me a lot better than the brown ones (^_^)

As opposite to this, these lashes from essence are shitty as hell. Actually I don't like this branch that much because I prefer others, but I used the normal lashes once and I think they're pretty okay for beginners as they're not that 'eye-catching' and have a reasonable price. I think they're quite uncomfortable to wear though (^^)
But these lashes aren't worth ANY money!!!!! I destroyed one of them as I took them out of the package because this little flower was fixed with such a strong glue, that it didn't get of the package. (-.-) I succeed in detaching the second one but it was so wavy that I couldn't apply it right.
=> never ever again

But the brush from ebeline for powder is really good! I used the black (non-vegan) one because it was a present but I will changed to this one immediately - it is a looooot better honestly! 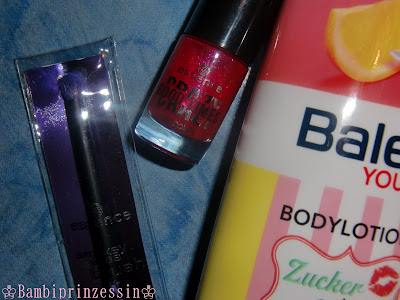 I said I don't like essence yes, but this nail polish catched my eye because it is pink with glitter (*-*) I'm a girly what do you expect? (^^) And I wanted to try this 'magic brush' blabla - We'll see tomorrow how my eye make-up will turn out with it. 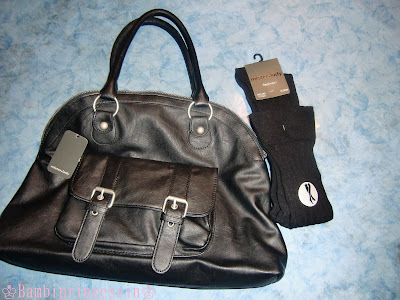 And last but not least the most important one; my new handbag! ♥ It isn't exactly what I was looking for but nevertheless I love it because it's classy and goes really well with all three of my coats. And of course you need warm legs - due to that I bought some over-knees. (^_^)