♔
Good Evening Lovelies ♥
Anyone else convinced that I'm taking this business law exam coming up on wednesday far too little serious? well....whatever! (^_^)

Recently I stumbled over a blog where a girl presented a challenge she's participating in and which sounded so  nice to me, that I couldn't forget it although I don't have a clue any more where I saw it. Unfortunately! If someone knows about this challenge and who brought the idea up - just tell me that I could attribute it to the right owner! (^.^)

The challenge rules seemed to be quite easy:
-read an english book per month
-write a review
-if you don't finish the book within one month, you  have to read another book as 'penalty'

Well of course it's easy if you read a lot - what I'm definately doing and because of that I try to read an english book per month, too and post the review here!  Needless to say that I already finished one (^.~) 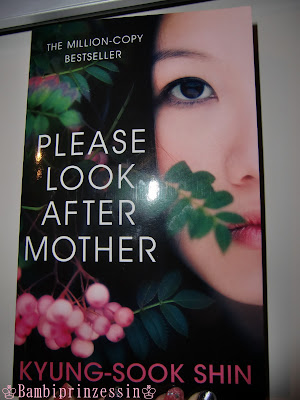 I told you when I bought the book, didn't I? But to be honest I don't remember, one day last week maybe. Well unimportant for the moment, here we go with the review! (^o^)
>>So-Nyo is a wife and mother to five grown-up children. She is the one constant - and often unacknowledged- presence in all of their lives, supporting them no matter what the cost. Then one day, travelling into Seoul by train, So-Nyo vanishes [...] << (blurb)
The author swichtes between 5 point of views during the entire book ; each chapter is written in another narrative perspective whereas the first one was the most confusing one for me, as it's directly written to an ominous 'you', which is the eldest daughter Cho-Minh I found out after reading half of the chapter. In the second chapter there is an omniscient narrator focusin on the eldest son, Hyong-chol, in the third chapter there's again this strange point of view directly writing to a certain 'you'again, this time it is the father whose name seems to be unimportant. For the storyline the fourth chapter is the most important one because this time it's a first person narrator - the mother herself. After this only an epilogue with an omniscient narrator focusing on the eldest daughter again follows.
While the whole family tries to find their mother it is revealed word by word, how less they know about her feelings & dreams. Their mother was seriously ill but nobody did something because they thought she would be strong enough on  her own - as well as the children in the town almost forget about their parents in their daily lives because they have so many things to do. Each of the protagonists has its own story, they're not really sad or depressing, but they're chasting you while reading. And all the things they did or say to their mother weren't really bad or meant offense - they occured due to a a daily life with distances in their relationship. Something that could happen to anyone of us easily, too.
Actually the theme is quite sad - a mother vanishes and her children and husband find out that they don't know her at all - but the sensitive writing style and loving character of the mom shine through the whole story. Although she could be mad at her family for so many reasons, she's still caring and even asks for forgiveness for mistakes she made in the past.

Of course I won't tell you how the story ends - wouldn't be funny for you any more, would it?- but be prepared to become a bit thoughtful or even nostalgic when you finished it. I recommend it though because I think it's important to make your mind up about the relationship to your parents ♥

! Finally finished this entry! LOL I just can't admit how long it took me to write these simple sentences, my english became so bad recently - I'M SORRY (Q_Q)
Please Take Care ♥
♔
Posted by Bambiprinzessin at 22:24