♔
Good Morning Lovelies ♥
I hope all of you are sleeping well - at least the ones living in Germany like me. It is half past one in the morning I slept about three hours last night but I'm not sleepy at all - damn you insomnia (.-.) I learned last night, this night.. because I have nothing else to do. I feel guilty if I don't do something useful. lol

As I showed you an outfit and make-up in my last post,  this one is about my nails. I varnish my nails regularly since I'm 10 - I started with black and as I can remember it was horrible. (^o^) I really like doing my nails and trying new colors, new styles and new methods but I can't say that my level's improving. It depends on my mood I think. 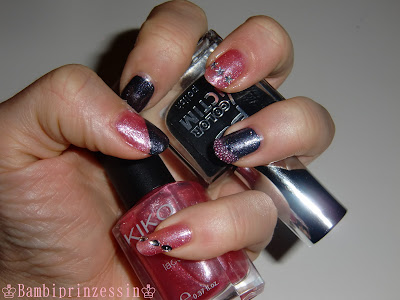 Hadn't had any clue what I wanted to put on the nails and this was the result. lol Could have been ways better if I had thought about it properly (^^)"
Nevetheless here you can see how the nailpolish from Kiko I bought last week turned out. Actually I was telling you I bought it because I wanted to have a 'casual' one, but this one isn't casual at all. The first time I applied it, it looke as cheap as one of these nailpolishes you got from littel girl magazines. I was really really disappointed. But in combination with the black and the little silver stones it's... okay I think but this won't be a favourite of mine. 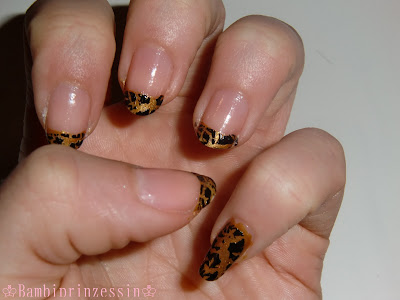 That's how I did them earlier this day. It turned out better as I thought it would (^_^) Ju-Chan suggested me the colors as I was clueless -again.

I plan to do got the mall on friday maybe to buy new blinblings for my nails ♥ And maybe a new shade of nailpolish as I have to go to Kiko due to buy lashes. Seems like a good plan! (^.^)


I try to sleep now too cuties.
Take Care & Goodbye ♥
♔
Posted by Bambiprinzessin at 01:34